As Envisioned in 1949: Pillar Point Breakwater 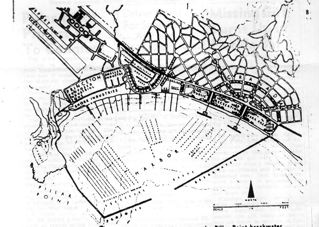 350 people met at the Miramar Hotel (formerly the Palace Miramar) to hear Colonel Freeman Tandy of the Army Corps of Engineers talk about plans for the Pillar Point breakwater, then estimated to cost $5 million. Speakers included Congressman Jack Anderson and Richard Nixon.

The Pillar Point project was to be one of 12 small harbors on the West Coast, providing safe mooring for 500 fishing boats “yielding an annual saving to commercial fishermen of $375,000,” said Col. Tandy. Another $82,000 in revenue would go to the country from recreational activities to be set up in the man-made harbor.

The bill for the harbor was introduced to congress in 1939, was twice vetoed during WWII but had finally become an approved government project. Congressman Jack Anderson of Salinas was the power behind the bill, calling the project “my baby and I’m going to see it built.”

(Construction of the harbor took another ten years)