October 1876: Wreck of the Rydal Hall 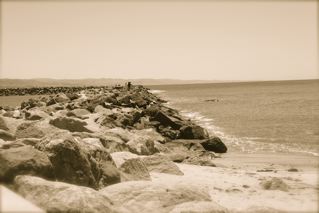 You can see the historic anchor from the “Rydal Hall” in the garden area fronting the Half Moon Bay Brewing Co. The old anchor was brought up by abalone diver Ernie Mangue.

“Intelligence reached us yesterday of the loss of the British ship, ‘Rydal Hall,’ at the whaling station near Spanishtown (Half Moon Bay). She went ashore on the 17th …late in the evening, and the latest news received states that she will be a total loss. Unfortunately, nine men were lost by the diaster, and at last accounts, the Captain was still on board. She was bound from Cardiff for this port [ed. San Francisco] with a load of coal and was a fine iron ship of over 1800 tons built at Liverpool in 1874, and was owned by the Sun Shipping Company of Liverpool, and she will be a heavy loss on the Underwriters, as she is fully insured.”

“The crew of the wrecked ship ‘Rydal Hall’ arrived in town last evening, and in a conversation with the chief officer we gleaned the following facts: The ship was running along with a light breeze, and in a thick fog up to 7 p.m. on the 17th…, when she was hove to, the Captain thinking himself about twenty miles from the Farallones. At 8 p.m. she struck. The men who were lost were drowned in attempting to land in the gig and lifeboat. No fog whistle was heard until about four o’clock on the morning of the 18th. The men state this fact positively, and it is but a continuation of reports of the same kind that have often been made off this point in regard to this whistle, and it is about time that some attention was paid to it. The ship will be a total loss, as she is already breaking up.”

“The wreck of the ‘Rydal Hall’ recently cast away on the Southern Caost, was sold in the Exchange yesterday; ship and cargo for $850, to Breeze & Loughran, for the divers, Loogee Brothers, who have already gone down to wreck her. If we have fine weather they will realize a good profit on their investment, by saving spars, sails, rigging, anchors, chains and provisions, etc.”

“The ship ‘Rydal Hall’ went to pieces on the evening of the 25th, without a thing being done toward salvage. Some difficulty occurred between the purchasers and the men they calculated to employ as wreckers, which is the cause of nothing being saved. A large portion of the woodwork of the vessel drifted past the Cliff House on the afternoon of the 16th and went over on the North shore. Quite a lot of the cabin fittings were among the wreckage.”

This entry was posted in Ernie Mangue, Rydal Hall. Bookmark the permalink.