Want to Know More About the Red Abalone?

From: California Abalone by Keith W. Cox (Dept of Fish and Game, 1962)

“Distinguishing Characters: This is the largest of all abalones, reaching over 11 inches in diameter. Outside color of shell dull brick red. Surface sculpture lumpty, usually covered with vegetation, barnacles, or other marine growth making color and sculpture difficult to determine. Inside iridescent and highly polished with large, distinctive, prominent muscle sear having dark green markings. Muscle scar has leling fine lines. 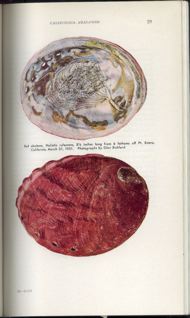 These lines are continuous across the anterior end of the muscle scar. Outer lip of shell extends over inner nacreous surface typically forming a narrow red rim (giving species its name); rim may be green, brown, blue, orange or mottled. Holes slightly raised, tubular, oval, usually three to four open, although specimens with no holes and others with more than four have been found. Body and epipodium are smooth, usually black, although some have alternate “dark” and “light” vertical stripes. Edges of epipodium scalloped, with black tentacles extending beyond edge of shell. In some individuals upper edge of epipodium is white and project just beyond edge of shell.

Distribution: Sunset Bay, Oregon to Turtle Bay, Baja California, and reported from the Farallons and all the Channel Islands. Over 800 wefre transplanted by the Department of Fish and Game in 1956 to Santa Catalina Island. In 1958, approximately 300 were transplanted to Washington where they were placed in the vicinity of the Strait of Juan de Fuca.

Habitat: Inhabits rock shores in certain areas along the coast from near high tide mark out to at least 540 feet, with maximum concentrations between 20 and 50 feet. In Northern California where it is not too plentiful, it is found near shore in shallower waters. It increases in abundance in central California and in the area from Cape San Martin to Morro Bay, the greatest numbers are found. South of Point Conception it is only occasionally found along the shoreline and then in deeper water. These abalones apparently require an active surf. Usually they are not found in sheltered bays but prefer locations where there is considerable wave action and water exchange such as along rocky headlands and promontories.”

This entry was posted in Red Abalone. Bookmark the permalink.