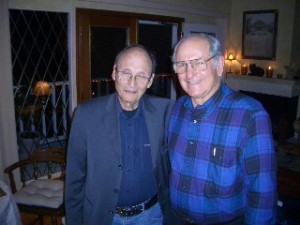 Friends of ours hosted a birthday party for Burt Blumert, at a home over the hill, on February 11. Earlier in the day we met “Big Daddy” Don Garlits in San Francisco where he was at a big car show signing autographs for fans at Moscone Center.

Burt has known Garlits for many years. When he told Don about the birthday party, and invited him to come along. Don Garlits said, “Sure. Pick me up at 5:30.”

Burt went to pick Don up, and while I was waiting for them at the party, I began to worry because they were late–and then they were really late.

Meanwhile they were having a wild ride all over San Francisco.. Don Garlits, the world famous drag racer, who won races right here at Princeton, sat in the passenger seat as Burt got lost, almost hit a pedestrian and ran a red light.

“I picked him up at the Holiday Inn in Chinatown,” Burt says. “Don hadn’t been in the Bay Area for almost 20 years and I decided to give him a little sight-seeing tour before we headed down the Peninsula for the party. The sight-seeing tour didn’t go well. The second time we passed the Palace of Fine Arts, Garlits asked me, ‘Haven’t we seen this before?’

Burt said, “Yes, but that was the other side of it.”

When Burt realized he was about to cross the Golden Gate Bridge, he made a sharp, illegal u-turn and told Garlits, “We don’t want to do that.” Meanwhile he was lost in San Francisco

“We were lost for 45 minutes. I didn’t know where I was. I was on the Great Highway, I was in the Avenues, I was at the top of Twin Peaks….”

Finally when they arrived at the party, Burt was exhausted and Don Garlits seemed happy to be alive.

————————
[In the late 1950s & early 1960s “Big Daddy” Garlits and his famous drag-racing rival, Don Prudhomme, drew record crowds to watch them compete at the Half Moon Bay Airport near Princeton-by-the-Sea. To get info about June Morrall’s book, “Princeton-by-the-Sea,” which includes a chapter with vintage photos about Big Daddy’s drag-racing exploits at the Half Moon Bay Airport, please click here.