First, what happened to the old Princeton sign? The one you see in the permanent blog photo above…it says Princeton, pop. 300. Who has that classic old sign? We should put it back where it belongs. 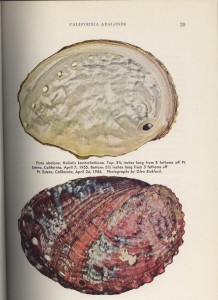 Distinguishing Characters: This species exhibits considerable variation in shell form. In its northern range, which extends from Alaska south to Pt. Sur, California, it is characterized by a long, narrow, highly arched shell, having a rough, irregular surface. Larger individuals usually have a prominent spire. In its southern form, which extends from Pt. Sur to Pt. Conception, the shell is more oval in shape and not as highly arched; the surface is more regular and smooth and the spire is not as high.

In both forms, the shell is thin, colored a mottled greenish-brown with occasional white and blue scattered over the surface.Holes number from three to six,usually five, with raised edges, and in some specimens a shallow, grooved channel under the lines of holes parallel to the edge.

The interior is an iridescent pearly white, typically with no marked muscle scar although larger individuals may have small clumps of of greenish nacreous substance scattered inside the shell in the region of muscle attachment. Raised, lumpy areas of exterior are reflected by hollows and pit-like areas in the interior. Sizes range to six inches, but seldom exceed four. The epipodium is scalloped and lacelike along the upper edge and colored a mottled greenish-brown. The body is mottled tan and greenish brown; some with tinges of orange. The tentacles are green and slender, and the tips extend from under the edge of the shell when the animal is moving or feeding.

Distribution: Sitka, Alaska, to Pt.Conception, California. Formerly thought to extend to northern Japan via the Aleutian Island chain,but the Japanese form has been established as a subspecies.

Habitat: In the northern range in Alaska it is found in shallow water among the rocks at low tide. Further south it is found in deeper water, and in central California the greatest numbers are found in the 35 to 50 foot depths. Although not a common species it is not rare, and in some areas in deep water offshore may be found in large numbers.

In deeper water this abalone is found more or less in the open on top of the substrate, rather than in cracks and crevices and on the undersides or rocks. The shells are covered with the same marine growths that are found on the substrate,making them difficult to distinguish from the surroundings. Food consists principally of small algae growing on the subsurface rather than the larger seaweeds which are favored by most of the other species. It is this diet which apparently gives the varied colors to the shell.