The Golf Ball Is With Us 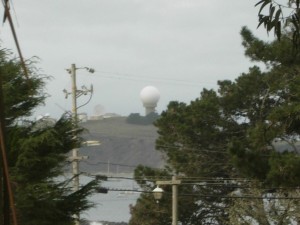 (Photo above is of the new radar station.)

In the 1980s it was flat like a big plate. Photo by Maria Demarest. 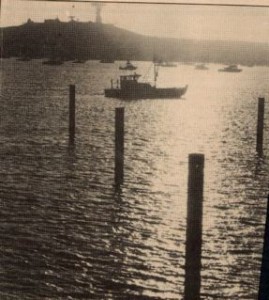 In the fall of 1981 I interviewed El Granada resident, Frank Millione, then a 41-year-old professional bowler, who, when, not working at Pillar Point Radar Station, traveled the country to participate in championship bowling contests.

Rumors of flying saucers launced from Pillar Point–that peninsula of land that juts out into the Pacific Ocean at the northern end of Half Moon Bay–circulate from time to time. The 80-foot radar dish, which sticks out like a sore thumb high atop Pillar Point, helps to stimulate fertile imaginations.

But 41-year-old Frank Millione, who has worked as a “special tech” at Pillar Point Air Force Tracking Station for 17 years, denies the flying saucer rumors.

Pillar Point Tracking Station–a division of ITT, tracks the flight accuracy of missiles launched from Vandenberg Air Force Base in Santa Barbara County. Millione told me that “There has never been anything around here that can honestly be called unexplained phenomena.” He explained the UFO sightings as being mistakes for missiles launched from Vandenberg in the evening or early morning when they can be seen near Half Moon Bay.

“It looks like a big white object streaking through the sky,” Millione said. “But people don’t recognize it, so they say, ‘I saw a flying saucer’.”

Vandenberg on the West Coast (California) is the equivalent of Cape Kennedy on the East Coast (Florida). “At Vandenberg,” Millione said,” when they look up at a missile, they’re looking at the back end. Due to heat produce at take-off time, they can’t see through it, so somebody must look at it from the side which is what we do here.”

Missiles launched from Vandenberg either go south or west. “The missiles that go south,” Millione told me, “are put into orbit and used for navigation and communication. The ones that go west are testing for inter-continental ballistic missiles, like the Minutemen–they’re targeted at cities.”

Besides two telemetries and two radars, there is a fifth system at Pillar Point. Frank Millione is in charge of the fifth system called command control. “Once a missile is launched,” he said, “it’s an object that’s not controlled, like a bullet in flight. While missiles are not externally controlled, they are internally controlled by a guidance mechanism that enables signals to be sent from Pillar Point to the missile and back.

“If something goes wrong with a missile, endangering the safety of lives, somebody must get rid of it. That’s one of the things I do. Blow missiles up.”

Frank Millione said he last blew up a missile about a year ago (1980).

Although several sites on the West Coast have the ability to blow up missiles, only Pillar Point ia allowed to do it. Two other stations act as back-up sites.

A new system recently installed (1981) at Pillar Point enables the station to move satellites. I “We can fire their engines up,” Millione told me, ” and move them from one position to another.”

This entry was posted in Fran "Buzz" Young, Uncategorized. Bookmark the permalink.