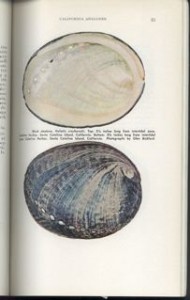 Distinguishing Characters: Color of outside shell typically dark blue or greenish black, sometimes orange. The exterior is usually quite smooth, with a little or no marine growth on it. the inside is silvery with green and pink reflections, typically with no muscle sear. Shell deep, bluntly oval, although variations in shape and form are common.

(A subspecies fond on Guadalupe Island, Baja California, H. c. californiensis Swanson, is characterized by 12 to 16 small open holes, H. c. bonita Orcutt is the same as the Guadalupe Island subspecies.) The body is smooth and black in color with small scallops along the upper edge of the epipodium; scattered short, slender, black tentacles protrude slightly beyond the edge of the shell.

Habitat: From near high tide out to about 20 feet with most intertidal. Usually found in great numbers crowded close together and at times stacked two or three on top of each other. This serves to keep shells free of marine growth since the intertidal area is sometimes lacking in sea weeds and they obtain food by grazing on each other’s shells. They also capture broken bits of sea weeds which wash by.