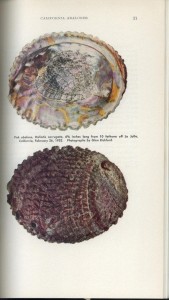 Interior brillantly iridescent, nacreous portion predominantly pink with traces of green. Large muscle scar with prominent dark green markings. Grows to 10 inches in diametere but most are six to seven. Young specimens are quite flat until they reach three to four inches when shell begins to arch.

This species offers a variety of shell forms making identification by shell characteristics alone sometimes difficult. The epipodium extending below the edge of the shell is roughened, its upper edge delicately lacelike in structure, is mottled black and white. The long, slender, black tentacles extend beyond the edge of the shell and the body is blackish.

Distribution: Pt. Conception south to Turtle Bay, Baja Califoria. They are abundant on Santa Barbara and San Clemente Islands and have been found on all of the Channel Islands. Individuals of this species have been recovered from Cortez Bank and are also found at Guadalupe Island, Baja California.

Habitate: Along the rocky shores from the intertidal area out to 180 feet of water with major quantities located in the 20-to-80 foot depths. They are found in the more protected coves and bays as well as along the exposed coast in the active surf. They feed on giant kelp (Macrocystis) but will also eat other species of seaweed.

The young remain under rocks and in cracks and crevices until attaining a size of three and one-half to four inches. They then move out and take up residence on the exposed surfaces of the rocks and cliffsides of the ocean bottom. Tagging experiments indicate that there is little movement. Tagged abalones have been recovered in the same general area in which they were released as much as three years later.

This entry was posted in Uncategorized and tagged Pink Abalone. Bookmark the permalink.