The First School House Was at Princeton!

“A general mercantile business was owned and managed by H. C. P. Morse and this was the only sore in town, as most of the marketing was done in Half Moon Bay when the people drove in to church on Sunday mornings

“Telephones were installed on May 5, 1914, John Kyne was the first long distance call to [the famous author[ Peter [Kyne] in San Francisco.

“The location of the first school house was at Princeton, where the Cosmopolitan building now stands. [note: this, I think was where Barbara’s Fishtrap is today,directly across from the John Patroni House [today the location of the HMB Brewery[.

“It was a two-room structure. The district ran from Pedro Point to Miramar.The teachers were Miss Kate McCarthy, principal, who was a sister-in-law of Mr George Hall, and Miss Rose Meehan, who for many years was vice principal in San Mateo near near where the Junior College is now located,under George Hall.

“After Mr. Savage, Rose Meehan returned to teach for a period of seven years. The school was located at the corner of Highway 1 and and Etheldore Street, which is now the residence of Gregorio Rossi.

“In 1890 a new one-room school was built in Sunshine Valley, which is now the house of Anthony Torre, and continued to be until 1910, when the present school was built. In these days attendance was just as great as it is now with 45 to 50 present.

“In the early days people enjoyed their card clubs and played regularly. The most exclusive club, according to the old timers, was the Cypress Club. The dances that the whole town looked forward to were given by this club in the hall over Peter Morse’s store.

“Notes on RR Station: This was the first RR station at Moss Beach and is still standing (Note: it’s’ not still standing.[ The station has been well preserved. It has been used for various businesses and is a at present a brom factory. 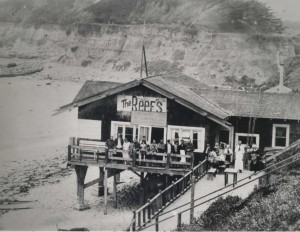 This building was destroyed in 1931, when the tides changed, bringing the surf up to the e]beach. The pillars under the building wre undermined and the bank holding it in the back was washed away The resort gave pleasure not only to visitors but the people of this community as well.It was quite an amusement center and convenient for swimmers to obtain refreshments.”