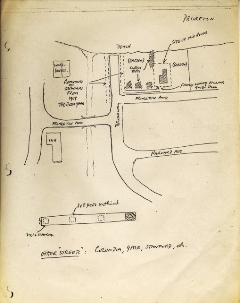 If you cannot read the writing on the map, here is my translation:
Upper left corner: it says “warehouses,” and is surrounded by a square box shape. Outside the square it says: “Remnants of sidewalks from 1908, The Boom Year.”

Upper right corner (opposite the remnants from the Boom Year) it says: “Site of Old House” Also there are ‘gardens and cypress trees” surrounding the old house. At the entrance to the old house, it says: “Fancy White Pillar, 9-10 feet tall.”

Below the remnants from the Boom Year, we have “Princeton Ave.” and the L shaped building labeled “Inn.” Other nearby streets include “Broadway” and “Harvard.”

Today Harvard is a main road through Princeton passing by several new businesses including Maverick’s, Elegant Cheesecakes, and the place where they make beautiful ironwork gates and other specialties.

Finally there is a listing of a few streets including Columbia, Yale, Stanford, etc. By Etc., the mapmaker means that all the other streets are named after famous American universities.

You have that interesting map of Princeton from the 1950’s. I thought you might like to add these two from 1863 and 1947. I also added a close-up of Whaleman’s Harbor …. 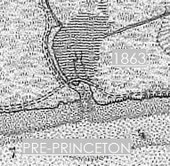