A little taste of Princeton….or is it Pillar Point? 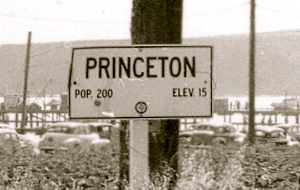 In the early 1900s a circle of important Half Moon Bay citizens met at the Patroni House in Princeton-by-the-Sea to discuss the tragic death of a local, popular fisherman. The beautiful bay was a wild, open harbor, and, during stormy weather, dangerous “Black Hand Reef” meted out its punishment, in this case, death to the poor fisherman.

The esteemed citizens, all men, lamented the open harbor. The fact was, all along the San Mateo County Coastside, there were no safe harbors, and, believe me, businessmen of great vision, had tried to harness the waves, wind and weather.

Half a century passed, until after WWII, when funds became available, a breakwater was constructed at what was called Pillar Point Harbor, with the work conducted by the Army Corps of Engineers. The harbor was named in honor of that sphinx-like slice of land stretching into the Pacific Ocean, called Pillar Point, or its less known historical place name, “El Pilar.” Today, to the north of”the Point,” as the local surfers originally referred to it, PP has been christened “Mavericks,” the world class surfing spot located out beyond a perplexing every which way flow of waves. When the waves at “Mavericks” are high-rise tall, the call goes out to the famous of surfers who are invited to a contest in the waves that brings the best to Princeton-by-the-Sea, or as some are cal it: Pillar Point.

This is confusing but I will endeavor to explain the difference between Princeton and Pillar Point. Princeton is where the shops and restaurants are located. To the west, there is Pillar Point Harbor, where a combination of yachts and fishing boats are moored. And the closer you live near, or walk the trails, near the land form called Pillar Point, some folks say they’re standing in a place called Pillar Point.

As a wide open harbor, punctuated with geographical exclamations (that is, they were, in the past, unconquerable) Princeton, and the entire Coastside, was like an isolated island, with a small, malleable population, and what turned out to be a perfect place for the profitable, but illegal business, of Prohibition. Princeton thrived during Prohibition–there were 3 harbors but the one most used was located across the way from the Patroni House, a once lively roadhouse, torn down circa late 1940s, near the present day site of the new Oceana Hotel & Spa.

The best way to enjoy Princeton, and Moss Beach, Princeton’s sister beach town, is to walk the inspiring cliff-side trail north of Pillar Point, high above “Mavericks,” the world-class surfing venue. It’s also an excellent spot to imagine what Prohibition was like, with the Coast Guard, whose little building still stands in Princeton but is now called the Half Moon Bay Yacht Club, chasing the clever rumrunners, local fishermen who met the Canadian mother ships anchored some miles out in the Pacific.

When Prohibition was repealed in 1933, an intrepid and industrious way of life that had jobs for the entire, close-knit community ended as well.

But sardines, a good source of Vitamin A, saved the day!–as a couple of canneries appeared before WWII,  and a Half Moon Bay kind of “Cannery Row” grew up around Princeton. I have heard fisherman John Koepf say in the 1970s, repeating what he learned from his father: “You could get ’anything’ in Princeton.” Restaurants sprang up with the names of the female owners like “Idas” and “Hazels.” The abalone was fresh and plentiful and diving for them drew a special breed who collected stories, including the best ones they heard from the old rumrunners who were still hanging around the harbor waiting for Prohibition to return.

Princeton remained a place out of the ordinary, eccentric in a Coastside way, the geographical barriers continuing to keep outsiders on the opposite side of the relentless mountains. It was an adventure, the kind literary books are written about, to visit quaint Princeton. At one point in the late 1950s a small band of edgy beatniks, kicked out of what you’d think would be a very permissive North Beach in San Francisco, relocated to Princeton, to a house called the “Abalone Factory.” What went on inside the Abalone Factory is the stuff of local lore.

Originally, Princeton-by-the-Sea was the concept of early 1900s Ocean Shore Railroad era developer Frank Brophy; the Princeton name was his idea, and if you wander through the unpaved streets worth wandering through, you will be impressed to discover that you are walking down Stanford, Harvard, Columbia or Yale, streets that make you feel like you are strolling among the highly educated, yet nobody can confirm how the names found their way onto the streets signs of this still funky fishing village beach harbor surfing place.