Posted on October 1, 2009 by junemorrall 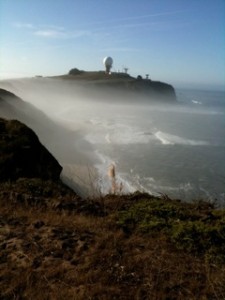 Years before one of the greatest surfing spots in the world was christened Mavericks, the Half Moon Bay locals called this big wave spot, secluded under the shadow of Pillar Point, as simply “the Point.”

Just like many locals refused to give up calling Half Moon Bay, “Spanishtown,’ some locals continue to refer to Mavericks as “the Point,” a place that holds their surfing and abalone diving memories.

I don’t think anyone calls Half Moon Bay, “Spanishtown,” anymore except when talking about the town’s colorful history. Life long resident Irene Debenedetti Bettencourt, who lived to be 100, was very casual when dropping the name, “Spanishtown,” into her conversation. It wasn’t forced; she wasn’t being quaint or insincere. Irene was a sophisticated woman, who enjoyed her Martini in the afternoon, and knew exactly where she lived, and that place was called Spanishtown.

Both Spanishtown and “the Point” have historical roots. Spanishtown was founded as a place where people lived in the mid-19th century. You can discover Spanishtown in the center of the modern “city” of Half Moon Bay. Pillar Point goes back even farther in time: the Spanish explorer-soldier SebastianVicaino noted impressive Pillar Point as he sailed by the strongly sculpted slice of land in the early 17th century.

But while it may be difficult, if not impossible, to find anyone who today calls Half Moon Bay, “Spanishtown,” there are many locals who continue to call “Mavericks” by the name they grew up with, and that is “the Point.”

My book is called: Princeton-by-the-Sea, published by Arcadia. Lots of warm memories splashed across the pages, especially for those of you who remember Princeton fondly.