Near Mavericks the other day

Posted on November 8, 2009 by junemorrall 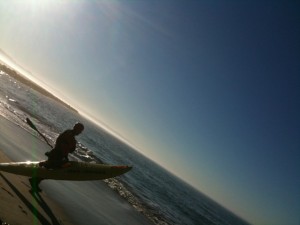 Yesterday, Saturday morning, I arrived at the parking lot in the shadow of the Pillar Point Air Force Station around 6:30 a.m. I’ve been driving over early every morning without worrying about getting a parking space. There’s 40-50 slots. But not yesterday. That early in the morning the pot-holed parking lot was jammed. There was action, movement, people, but in the middle of it all there was a big silence, almost spiritual, as surfers in their black wet suits knelt on the ground, waxing their boards. I thought, wow, maybe this is it: maybe the call went out for the big contest, maybe the waves are SKYSCRAPER TALL.

I ended up driving north to the Moss Beach side of Pillar Point and walked back toward Mavericks. The waves were nice but no cigar, no contest. What remains in my head is the image of all those folks moving about in the parking lot and all that silence.