Whether it happens or not, We’re Celebrating Mavericks: Interview with Jeff Clark 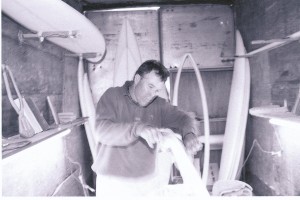 As I was working on my Princeton-By-The-Sea book a couple of years ago I interviewed Coastside surfer Jeff Clark, the “face” of Mavericks.

I’m a bit older than Jeff and I remember him as a teenager living with his family in Miramar Beach behind the geodesic dome and A-frame with the concrete angel on top that belongs to photographer and adventurer Michael Powers. At the time, though, it was the 1970s, the dome and A-frame had not been completed and Michael was living in the original house that stood on the property next door to Medio Creek. It eventually burned making way for the more fun stuff.

The Clark family lived in a newer two story home behind Michael Power’s and that’s where I had my first glimpses of young Jeff Clark wearing a wet suit, surfboard in hand. There would be us, the hanger-outters at Michael’s unique place, always active, maybe helping to build the dome, but always doing something because Michael would have it no other way– and then out of the corner of my eye I would see the fast moving image of blonde Jeff Clark. There, and then, poof, gone to catch the waves.

That was also the time when, not far from the Powers and the Clarks, the Film School had set up shop, shooting the local scenery, and offering classes to aspiring filmmakers. As I recall, there was a lot of running through the fields….

Jeff told me he first visited cozy Miramar Beach as a youngster in 1963. He came with his grandfather and there wasn’t much there except for a few houses, including farmhouses, Spouters (the present day site of the Miramar Beach Inn), Pete Douglas’s Ebb Tide Cafe/Bach Dancing & Dynamite Society, and Albert’s, which during the Ocean Shore Railroad era was home to the stunning Palace Miramar Hotel, equipped with a salt water plunge. Decades later Albert’s was named for its owner in the 1960s, Albert Schmidt, and he and wife Eva ran it as a restaurant and bar overlooking the then prolific sand dunes –and a former early 20th century wharf that was rapidly disintegrating. For the locals it was great sport to enjoy a drink at Albert’s at sun-setting time and make bets on when the last pier piling would vanish forever. Albert’s, one of the last reminders of Miramar Beach’s historic past, burned about 1966.

Three years later the Clark family moved to Miramar Beach where they replaced a farmhouse and water tower with a new home.

In the late 1960s and early 70s the places to surf were at Miramar, Martin’s Beach (south of Half Moon Bay) and “the jetty” at El Granada, also called “Surfer’s Beach.”

“The jetty,” said Jeff Clark, “was the only wave-protected area, inside the rocks.” In the 1970s Ano Nuevo, south of Pescadero, became a decent destination.

But Clark did not know Mavericks until 1968 or 69. He added that in the early 1960s it wasn’t home to the big wave spot it is today; on the contrary, the waves were much smaller than today’s 70 foot waves which have brought great fame to Mavericks.

[Locals often surfed Mavericks, a place they knew as “the Point.”  In the early days you could drive out there and leave your car in a large parking lot. One of the most famous surfers was Walt Von Hauffe, who owned Von’s Cinema which was located in the town of Half Moon Bay.]

Jeff Clark’s love of the waves naturally grew into the business of fashioning custom surfboards for every kind of wave, small or big, in the world. He began making boards in 1981, in the old Henry Doelger Mill Building in Princeton, the building where wood had originally been processed for home construction in the 1950s. Like all good artists, he has “the eye,” and the patience to make hand-shaped, tailor fit boards.

Remember, it was two or more years ago when I talked to Jeff about the Mavericks Surf Contest, and he was very involved in organizing the spontaneous event that takes place some time between November and March. He talked about tracking the weather, waiting for the big waves  to show up (he can see the waves breaking from his living room couch) and calling up 24 surfers, many from Hawaii and Southern California for the one day event. (For variety, every year ten new surfers are added to the list.) They have 24-36 hours to make the date.

The giant wave that is Mavericks is located a half-mile off shore. That means the surfers are transported on jet ski boats to ride the slippery slope off Pillar Point, a magnificent slice of land that juts into the blue gray Pacific.

The storms are here and there’s a lot of big wave talk around Half Moon Bay. Before the rain began, my cousin and I took a long walk this morning, out to Mavericks, and then on the cliffs above, we looked toward Pillar Point and the sea, wondering if the time was going to be right for the perfect 70 foot waves.

Jeff Clark told me Mavericks was not named for his dog. Long ago, he said, before the place became famous, he heard a fellow riding a longboard called it “Mavericks.”