“San Mateo County officials and members of the San Mateo Elks Club are ‘conspiring’ to hold a two-day county-wide drag race May 4 and 5 on the central Coastside.

“The ‘Conspiracy’ is a result of the move to prevent illegal and night drag races which have been held in the past at various points on the Peninsula.

“If plans now under way are successful, the hotrod drag race will be held on the main runway of the Half Moon Bay county owned airport at Moss Beach.

“Since this airport is used by the airlines as an emergency landing field, county officials must first obtain permission from the Civil Aeronautics Administration.

“The San Mateo Elks Club has promised to underwrite all expenses of the affair.

“According to officials, drag racing is becoming an increasingly great problem and their effort would be not to constrict activities by confing it.

“On the central coastside youths who enthusiasm runs to cars and drag racing interests, are forming a hotrod club. They will be known as the ‘Night Angels’ and are now meeting once a week at the Half Moon Bay High School….”

[Note: I’m looking for vintage photos of the HMB racetrack, fast cars and the people behind them….] 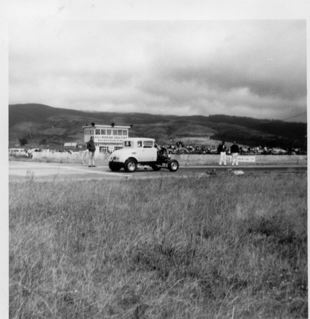