Likewise, the size and shapes of the holes are determined by the types of sea creatures that create them.

Here’s information from Wikipedia about the mollusks that create the most commonly seen type.

Pholadidae, known as “piddocks” or “angelwings”, are a family of bivalve mollusc similar to a clam; however, they are unique in that each side of their shells are divided into 2 or 3 separate sections.

Furthermore, one of the piddock’s shells has a set of ridges or “teeth”, which they use to grind away at clay or soft rock and create tubular burrows. The shape of these burrows is due to the rotating motion of the piddock as it grinds the rock to make its home. The piddock stays in the burrow it digs for the entirety of its eight year lifespan, with only its siphon exposed to take in water that it filters for food. When the piddock dies and leaves an empty tubular burrow, other marine life such as sea anemone, crabs and other molluscs may use the burrow.

Some species of Pholadidae may reach up to seven inches. Their coloration is typically white, though through consumption of red tide algae some may develop a pink coloration.” 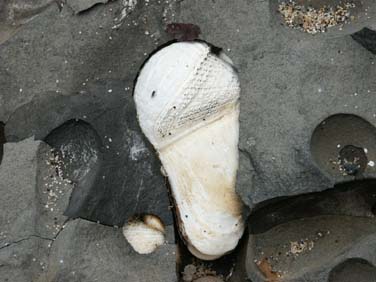 is of a dead piddock clam still in its burrow in a rock I split. It clearly shows the shell’s ridges that it used to accomplish the amazing task of burrowing into the rock where it makes its home. Note that the hole becomes larger as it moves deeper into the rock. This is the way you can identify the holes from this family of mollusks in this type of Swiss Cheese NotRock.

I used to call these types of borer mollusks, “The Ocean’s Couch Potatoes.” I did so because any super serious TV watcher who has a favorite old broken-down sofa knows the importance in scootching back and forth until a perfect settling-in-for-the-long-haul process involving a proper melding of gluteal tissue, misplaced stuffing, and loose springs, has been accomplished. 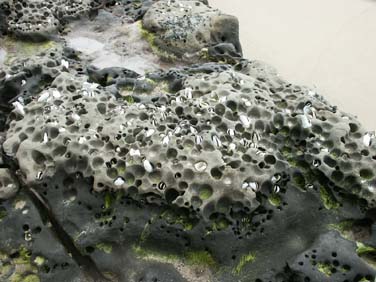 is from a place I call, “The Forbidden Zone.”

The presence of so many of the fragile Piddock clam shells still in their holes leads me to believe that they were all smothered by at one time by sediment collapsing from the cliff above. Erosion by winter’s high surf probably revealed them not long before I took the picture. Since the picture was taken high tide and big waves have washed many of the shells out of their holes.

The second group of Swiss Cheese NotRocks is characterized by shallow, rounded holes, usually no deeper then a half hemisphere. The creator of these holes are the various types of sea urchins found along our coast. They do so in a method similar to the piddock clams, fastening themselves down then twisting their spines against the rock. That is tough on the spines, but they regrow continually.

While the urchins can move around if they desire, the protection the hole provides from predators (sea stars, sea otters, and sushi lovers mainly) and wave surge makes them tend to hang around home like any good Couch Potato should.

If the hole becomes too deep and they become too big they are imprisoned by the upper lip and must depend on eating only what floats their way. I suppose that also explains why human Couch Potatoes surround themselves with lots of snacks just in case a protruding sofa spring entangled in their pants imprisons them. I’ve attached a picture illustrating a typical sea urchin condo.

The third type of Swiss Cheese NotRock is characterized by small holes with tiny openings. These are created by date mussels, mollusks of the Lithophaga (stone-eater) family. They use a non-Couch Potato method involving the secretion of mucus containing an acidic chemical that erodes the rock. Once deep in the rock, they greatly reduce the size of the opening in a manner similar to wasps by using a mixture of the mucus and dissolved rock as cement. Because of the chemical nature of their boring method they are restricted to calcareous rock.
Lastly, I’ve attached a photo of a Tafoni rock. 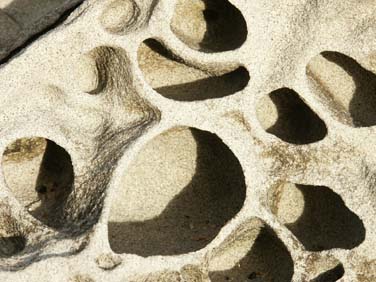 The irregularity of the opening or the interior of the hole makes them easy to distinguish from organically created Swiss Cheese NotRocks. Enjoy. John Vonderlin