Posted on December 9, 2007 by junemorrall 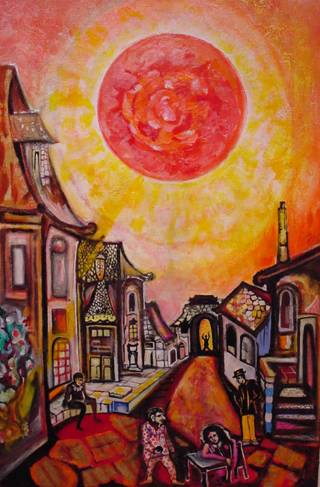 “Hot Day In France” by internationally renowned painter Michael Bowen, who, in the late 1950s lived at Tunitas Creek and the Abalone Factory at Princeton-by-the-Sea. Michael’s in my new book, “Princeton-by-the-Sea,” published by Arcadia.

Here is a painting I made several years ago. It was one of the first big sun crisis to hit the world. It was not by any means to be ignored, yet though thousands died that year due to the heat, only a few human beings picked up on what was coming. I began to see and feel myself in the late 80’s in Hawaii, something was not just right with the sun. It gave both my daughter and I when we were living in Hawaii as well as San Francisco, a kind of unusual burning feeling. So, we stopped sun bathing. Other people noticed it then. I guess it takes a while to realize that a catastrophe is hanging over everyone’s head. Here for your contemplation is my painting; Hot Day in France.

This entry was posted in Michael Bowen. Bookmark the permalink.