[One part of coast-side history that is noteworthy is the Mangue family. Ida, Ernie and their three children: Ron the eldest, then Jeanie and Rudy, who was a year or so older than me.]

My first job was working for Ida at her crab stand which was across from the HMB Brewing Co. on that now priceless piece of barren land right on the water. I was in the 4th grade and worked weekends, icing down the fish, cleaning, cracking and picking crab, and all the other cool stuff you do in the operation of a crab stand.

Ida was a sweet lady and you couldn’t help but like her. She had a loyal clientele that were more like family. It was a great place for a little guy to work. 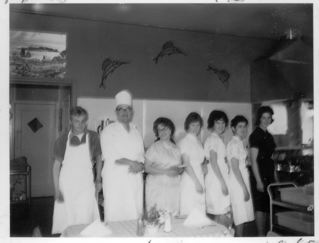 Ida’s husband Ernie, a real character, was a commercial fisherman and abalone diver. The boys also worked with their dad.

Jeanie worked at the crab stand too. She was a hottie.

The Mangues bought the restaurant across the street, now the Brewing Co. Ernie was the chef, Jeanie the waitress, and I was everything else. Ida continued running the crab stand. The boys took over the fishing part of the operation.

When Ron was in high school, he fished with his dad on the week-ends. They’d head out to sea early in the morning and work all day. By the time they got back to the pier and unloaded their catch, little time was left for the pursuit of the opposite sex. Time was of the essence, and any serious competitor knew he’d better get out there if he were to catch something.

Ron had a collection of brightly colored Pendleton shirts. He’d throw one on, never bothering to take time to change his fish flavored levis, hell, that was what Mennen Skin Bracer aftershave was all about.

I was amazed at how quickly he could change and fly to his chariot, and then shoot to town. If odors had color, he would have left beautiful comtrail. Hence the “Mangue Bath�?.

And by the way, he did eventually hook himself a dandy.

Well June there’s a little. To this day those of us who knew Ron still call it taking a ‘Mangue’.

This entry was posted in Collin Tiura, Idas, Princeton-by-the-Sea. Bookmark the permalink.