Searching for photos of the 1946 tsunami leads to the unexpected..

Back in the late 1970s, I self-published “Half Moon Bay Memories: The Coastside’s Colorful Past.” It was an exciting project, taking me places: physical, intellectual and emotional that I’d never explored before. My dream of emulating the Paris publishers of the 1920s had been fulfilled. I published a book that I loved.

“Memories” received a lot of publicity, including a big spread in the Sunday San Francisco Chronicle. As a result, I got letters from all over the country, letters that I’ve kept in a couple of shoe boxes. I realize now, having the Internet as an excellent resource, that I should have paid closer attention to some of the letter writers because they had good stories to tell me– but I didn’t follow up.

There were three letters from the Wiegels, postmarked San Francisco and Berkeley. J. Mason Wiegel, an attorney and editor of the Weekly Law Digest, headquartered on Montgomery Street, noted that as a child he had lived in El Granada in the house pictured on the bottom of page 142 of my book. His father had worked for the Ocean Shore Railroad, riding the train into the City every day. The Wiegels moved when the Ocean Shore filed bankruptcy.

In 1979 I also received a letter from R.I. Wiegel, a Berkeley resident. He was interested in buying the Memories book.

I didn’t connect the two Wiegels, J. Mason and R.L., until recently when I rummaged through the shoe boxes, opening and reading the 30-year-old letters, still crisp in their envelopes. A quick search of J. Mason Wiegel on the ‘net told me that he was gone–but copies of his Weekly Law Digest were available at a used book site. About R.I. Wiegel, I didn’t have a clue.

Meanwhile John Vonderlin, fascinated with the 1946 April Fool’s Day Tidal Wave, discovered that some photos of the tsunami’s damage at Princeton-by-the-Sea, might be found in the archives at UC Berkeley.

John was right. There were photos I hadn’t seen archived in the Water Resources Center, O’Brien Building, at Berkeley. The specific collection I wanted to see was kept in the R.L. Wiegel Collection. (There are some 50,000 images in the Wiegel Collection with about 16 of them relating to the 1946 tsunami.)

After the first of the year, 2008, Burt and I headed for the O’Brien Building, which we saw right away, is like going back in time. It is not a hi-tech venue. All around the old O’Brien Building, there are brand new structures going up, serving to emphasize the difference.

School wasn’t in full session so I didn’t have to wait long to see the slides in the R.L. Wiegel Collection. About 15 minutes later an elderly man walked into the room. He was clearly a man of authority and respect as the staff gathered around him.

One of the staff approached me and told me the man was Professor Robert Wiegel, would I like to meet him? Of course. Seconds later I was talked with the professor and had learned he was the man who had written me the letter in 1979. His brother was J. Mason Wiegel. Their father had worked for the Ocean Shore, completing the plans for El Granada and when the railroad ran out of money, Wiegel, Sr. was paid in building lots which he sold off slowly.

“My father said El Granada was the most beautiful place in the world,” Professor Wiegel told me.

I told him I had kept his correspondence; he said he still lived with his wife in the same house. Now in his 80’s, he didn’t come into the office much, so our encounter was special, indeed. 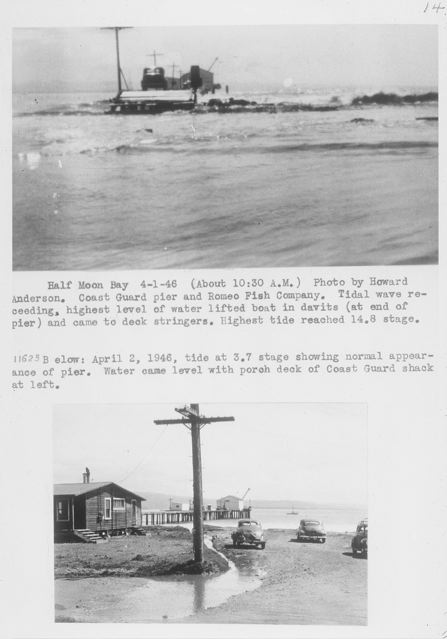 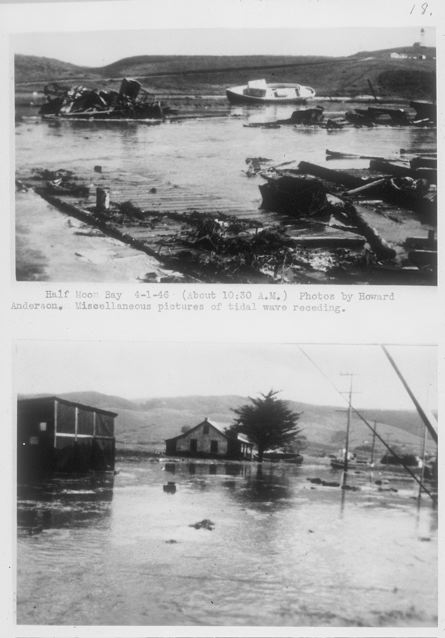 5. Anderson, Howard (UCB Waves Project) Half Moon Bay. About 10:30 a.m. Tidal wave receding, level of water is said to have come to the window sills of the house. Tide of 14.8 (Robert L. Wiegel Coastal Slides Collection.) 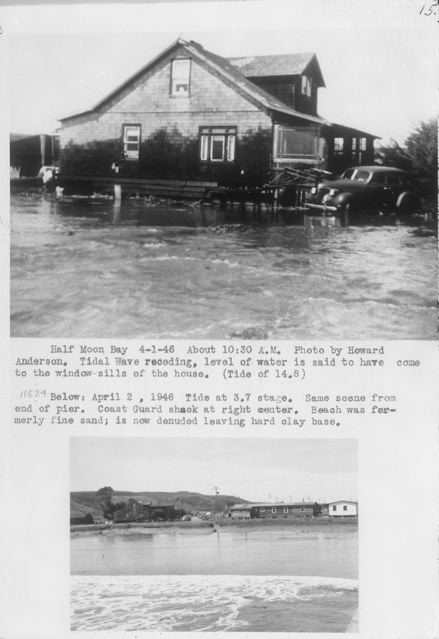