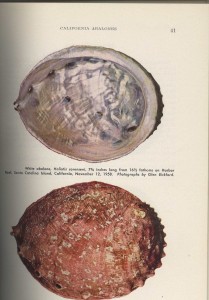 The interior is a striking pearly white with iridescent tints mainly pink; the outer edge of the lip is quite thin with a narrow red border. The muscle scar is typically absent, but if present is poorly differentiated; in some larger individuals small blue-colored nacreous clumps are scattered over the interior.

The epipodium is roughened and is mottled yellowish green and beige color. Its edges are scalloped and lacelike with occasional edgings of orange. The long, thin, light green and yellowish tentacles extend beyond the edge of the shell. The portion of the mantle extending over the head region of the animal is edged in purple.

The body is typically yellow or orange colored and the meat is quite tender. Shell attains a length of ten inches, but most are five to eight. Individuals smaller than four inches are rare.

Habitat: A deep water form found from 15 feet (rarely) to 150 (may extend to greater depths), with greatest concentration between 80 and 100 feet.