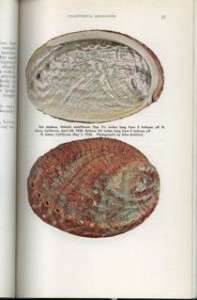 Distinguishing Characters: Ranges in size up to seven inches, but most individuals are three to five. Shell oval, long and narrow, considerably flattened.

Surface sculpture spaced, lamellac-like striae. Inside of shell pale pink, with green reflections. No muscle scar although some may have small clumps of scattered green and brownish nacre in the muscle attachment area.

The body is a mottled yellow and brown with tinges of green. The epipodium is lacelike along the upper edge, colored a yellowish-green with large brown and yellow splotches. The surface of the epipodium is rough and the tentacles are dark green and slender.
Distribution: British Columbia to La Jolla, California, but rare south of Carmel, California. Generally not plentiful but occasional abundant in small areas.

Habitat: Found subtidally and to depths greater than 70 feet. Lives on and under rocks with other species of abalones. Feeds by grazing on small attached algae.