Photographer Michael Wong Said: Got To Get Her Into My Life

In the year 1959, my family moved to Pacifica, CA., from San Francisco. All of a sudden, I was in peaceful Westview School. Up until then I had to fight to survive in the tough city. That year in second grade, I met a cute little girl named Deborah Hagler. We were immediate friends.

They sent me away to a new school for third grade, but in forth I was back. Debbie and I were kind of an item even at that tender age.

Debbie and her sister Laurie were artists in many ways. Debbie would have kids standing over her shoulders to watch her draw; her specialty was horses. I can remember the teachers would send them from classroom to classroom so that they could perform their singing and ukulele act: “We Ain’t Got a Barrel of Money”. They harmonized beautifully, and I was spellbound.

In one incident, I asked Debbie to please draw a horse for my wall. 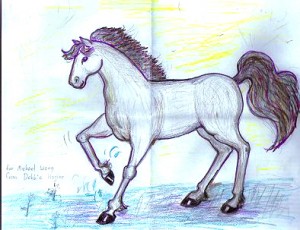 Debbie drew a stick figure, and threw it at me. I laughed it off, but was puzzled. 36 years later, I would find out her reason. My whole childhood world would change drastically in the fifth grade. My Mom and Dad announced that we were moving. We packed up and I said goodbye to friends, teachers and to little Debbie Hagler.

Life wasn’t too bad at the south side of Pacifica. It was more of a surfer, coast part of town. I made friends, as all children do. Attended Terra Nova High School, and graduated in 1970. I won’t go into all that I’ve done with my life because that’s not what this story is about. Fast forward to the year 2000, 30 year class reunion coming up. As I logged into classmates.com, I couldn’t believe how many of my old classmates were writing online. It was unbelievable, almost a timeless world where we felt like teenagers again, writing stories and reuniting. The class reunion was a two-day success, including about 10 teachers. We had a blast, and a lot of it was planned through classmates.com.

Then the reunion was over, all that could be written on classmates was posted. Bored, I jumped over to our rival school, Oceana. As I read their posts I ran into a topic: “Westview Kids”. As I scrolled down, there was a class photo from my 4th grade class, my very young smiling face was something that I hadn’t seen for decades. 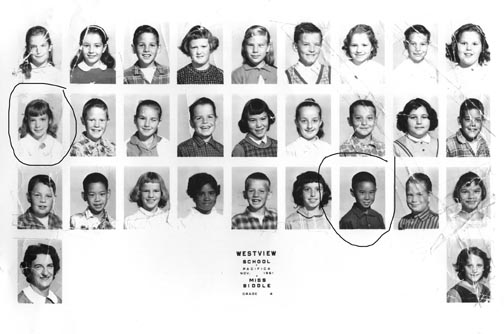 Who the hell posted this? Scrolling down I saw that it was Deborah Hagler. Almost 40 years had past, seeing her name gave me an exciting, wonderful feeling. I wrote to her through the message boards. She replied by telling me: “You were my very first boyfriend”. Since this was a public message board, we quickly went to private email.

Many emails and phone calls later, we made a date to meet in person. Our first meeting since we were very young children, it was as if we had never parted. We were instantly close….very close!! Oh, of course the question came up about the stick figure horse. It turns out that she was very upset (at 9 years old), because I had turned my attention to another girl in class.

Well, I have my horse drawing on our wall, and I have the bride that I was meant to be with all my life. Debbie and I were wed on January 9, 2002. For many pictures and stories about our life together, check out debwong.com 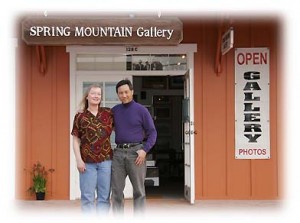