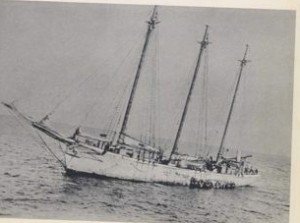 Top & Below From: Rum War at Sea: by Malcolm Willoughby, Commander USCGR (T)

“The markets for liquor at San Francisco, Los Angeles and San Diego attracted rum running in those areas. Contact boats operated there much as they did off New York. Large rum vessels would load at Vancouver for a run south, and after delivering their wares, would return to Vancuver for a new load. Monterey Bay, about 70 miles south of San Francisco, and Half Moon Bay, somewhat nearer, were excellent for clandestine operations because of the many landing places, proximity of good roads, relatively sparse population. Therefore, a patrol was maintained over an extensive coast line between Point Arquello and Point Arena. Weather permitting, this patrol was carried out chiefly by cutters Shawnee and Cahokia, each vessel relieving the other. These were large steel steam tugs of 151- and 158-foot lengths, respectively, with cruising speeds of about 10 knots and top speeds of about 12. These were usually rugged patrols which lasted from 5 to 7 days.

“Shawnee was based at San Francisco, Cahokia at Eureka, 80 miles south of the Oregon line, and a third, similar cutter, Tamaroa, at San Pedro, south of Los Angeles. Some 75-footers operated out of the San Pedro and Alameda bases. The Pacific coast is extensive, however, and the rummies were driven to isolated spots away from these areas for landing their cargoes.

“Some large rum running “mother ships” of the Pacific became quite famous. One was the British steamer Ardenza. Sailing from Leith, Scotland, she passed through the Panama Canal with 25,000 cases of Scotch Whiskey, and steamed up the coast to Half Moon Bay. There she remained for 7 months in 1924. Contact boats from San Francisco took 18,000 cases, and carried provisions and supplies to her on return trips. It is incredible to suppose that her presence and business were not known. It was said that contact boats passed through the Golden Gate [ed. this is pre-bridge] at certain hours when a particular official on duty found it profitable to be unobserving. Finally, Ardenza disposed of all her cargo and steamed on to Victoria, British Columbia, where she was seized for debt, sold to new owners, and taken back to Leith.

“For a time, notably in 1923, several rum ships from British Columbia were lying 30 miles off San Francisco, threatening to become the nucleus of a Pacific “Rum Row.” This was the closest to a “row,” which nevertheless, was never really established.” 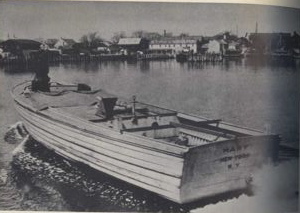 Note: The Half Moon Bay Yacht Club was home to the Coast Guart during the years of Prohibition. What a wonderful history Princeton-by-the-Sea has.