Posted on December 17, 2008 by junemorrall
Pillar Point Arch
Story/Photos by John Vonderlin
Email John ([email protected])
Hi June,
I try not to let my desire to explore the Coastside’s hidden spots interfere with my “caregiving commitment,” so I usually limit myself to one trip a week to visit them. This week with its lowest tides of the year was an exception. After our last adventure to the site of “Waldo, the missing sea arch,” and Bean Hollow’s spectacular “boxed tafoni,” I had hoped to use Friday’s minus 1.8 foot low tide to at least get my toes on the sand north of where Gordon’s Chute used to be, unlike the last try. With the moderate-sized, but growing- larger waves that were preceding this Artic Express storm bearing down on us, we decided Gordon’s Chute site was not the place to be. Especially, if we planned on using it as a forward base to enter “The Forbidding Zone”– that wild stretch isolated by high cliffs north of Tunitas Beach.

Instead, we decided a survey of the Fitzgerald Marine Reserve and an attempt to check out the northern side of Pillar Point would be safer, if not as exciting.

First we tried the parking lot near the Moss Beach Distillery, but decided that although the steep, and obviously well used trail leading to the beach was possible, the TRAIL CLOSED sign and a bunch of words like EXTREMELY DANGEROUS on it made that route a poor choice.

So it was back in the car, and with a “maze-like” drive through the residential area along the bluff, we arrived at the newly rehabilitated P.O.S.T. Trail along the bluffs just north of Pillar Point. It was very civilized, but had boring views, given how far safety and erosional concerns have placed the trail from the blufftop in many places. But, I’m spoiled and most people would be satisfied with the endless ocean views. When you were close to the edge, thanks to the low tide, the complex structure of the reef that is Fitzgerald Marine Reserve is laid out before you. 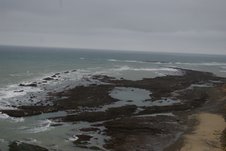 Getting closer to the Air Force Station that monopolizes the Point, we used one of the several steep, but relatively safe trails to the beach. By now the low tide was close to full ebb. With this minus 1.8 tide the reef’s diversity was spectacularly displayed. Hating to stomp on some critters, so we could gawk at others, we instead started working our way towards the edge of Pillar Point, heading seaward. As we got close to the cliff I couldn’t help shooting the Giant Golfball from angles I’ve never seen a picture of it taken from. I’m not sure I’d want to have to look at it all the time from HMB, but that might be because I was a “military dependent,” and had my fill of being up close- and- personal with the typical ugliness of military installations. But from right below it, with the “Golfball” looking like it was ready to roll over the cliff, it was quite photogenic. 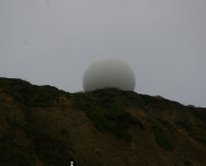 As we carefully worked our way around the Point, there were a few spots where “eel grass” felt my boot’s wrath, and I might not have successfully put my foot on a bare patch of rock every step. But, by and large, very few critters were harmed in the short stretch of reef we negotiated. Which was as much for survival as compassion, as stepping on squishy stuff may produce a banana peel cartoon moment without the laughs, but with broken bones. And the tide won’t stay out forever, while you’re dragging yourself or somebody else to safety. The crabs might not either.

That intensity of focus on where the next safe and “murder-free” step was, left us unaware of what was coming next. Until having reached rocks not heavily covered with slimy growth, we looked up and there it was. An awesome walk-through arch. A huge arch, whose hole was the only path through the promontory blocking our way to the next cove.

Passing through the hole we found ourselves in a very interesting cove with it’s own personality. The  pink encrusting coral was  more extensive there then any place I’ve ever seen. 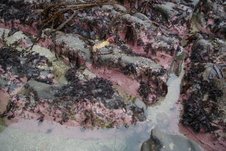 A little looking around, and it was time to move on to the next slippery gauntlet necessary to pass through to reach what I assumed was the next hidden cove. Clambering around the rocks I was suddenly looking at a low, flat shelf stretching straight ahead for hundreds of yards beneath the sheer cliff that is the terminus of Pillar Point. By staying in the narrow and fairly uninhabited transition zone between the reef and the cliffs it was a Sunday walk from there. 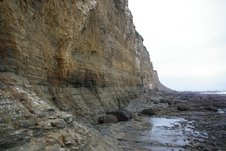 Though we didn’t walk all the way around the Point, it was obviously easily accomplished. I know that because we could see people ahead of us on the seaward-stretching promontory, freshly emerged from the sea, that bounds the Maverick surfing area on the south and visually terminates in Mushroom Rock. They had obviously used the southern entrance, as everyone else does, to get to this rarely-possible-to-be-visited stretch. Some day we’ll return and finish the circuit all the way around the Point. Hopefully, soon enough to get a picture of me standing on Pillar Point’s Backdoor Arch before it disappears. Enjoy. John
This entry was posted in John Vonderlin. Bookmark the permalink.