John Vonderlin: Daisy Gets Her Man 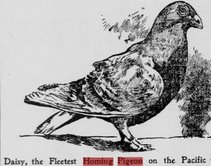 This is the story of an intercontinental serial killer at the end of the 1800’s, who some say had an English royal family connection behind his many names and crimes, a connection that was protected even after his execution. Its relevance to the Coastside is through the Farallone Islands, but also the growing-more-remote possibility of live pigeons having anything to do with the naming of Pigeon Point. If carrier pigeons were used to relay messages about ship passings at Pigeon Point, before the wreck of the Carrier Pigeon, I can find no record of it. It is possible, as the usage of carrier pigeons, to carry messages, is thousands of years old, often used in warfare, or to relay expeditions’ progress, or even as part of a prescription delivery service more recently. But, other then this story, I can find no other Coastside connection in the 1800s.

The excitement of the public, or at least the newsmen, that engendered this complex usage of carrier pigeons to announce Butler’s arrival reminded me of the “Slow Speed White Bronco Chase,” mania that gripped the news media.

The arrival and trial are well-covered in “The Call” issues from early 1897. Those can be brought up by a “Frank Butler” search at the “Chronicling America website. Just five months later, the July 17th, 1897 issue of “The Daily Alta,” had a small article that says:

On the Scaffold He Confesses

Sydney N.S. W. July 16—Frank Butler was hanged here yesterday for the muder of Captain Lee Weller, Shortly before the execution Butler confessed that he had not only killed Weller, but murdered two other men Preston and Burgess in a similar manner. He also confessed other crimes.

IN THE CAPTURE OF BUTLER

The Coming of the Murderer to Be Heralded by

NOVEL USE FOR HOMERS

Speed of Birds Will Be Pitted

Against the Craft of a

WILL FLY FROM FARALLON.

As Soon as the Swanhilda Is Sighted

the News Will Be Winged to This Ciiy.

This morning there will start for sea on

the pilot-boat Lady Mine, otherwise

known as the bar boat, a cote of doves, or

homing pigeons, their destination being

the Farallone Islands. Their mission is

unique— for they have a mission— one of

importance, and of singular and timely

interest. They are sent out to do some-

Journeying toward San Francisco on

Butler is, supposedly, approaching a crisis

in his life. Reputed to be the most atro-

cious of all modern murderers, public an-

ticipation has by him been put on edge,

and there is much anxiety to learn as

early as possible of the first ap-

pearance of the Swanhilda. Strangely

enough, and beyond all probable chance

of failure, the gentlest of all animate

things, a dove, will bring in the earliest

news of the coming of the most ferocious

murderer. It is for this purpose that the

homing pigeons will to-day go out on the

Lady Mine, which will make a trip to the

Farallones for the sole purpose of carry-

Mixed in with the generally grewsome

(sic)flavor which attends this exciting man

hunt on the high sea is something of ro-

mance in the combination of methods of

communication for tbe purpose in hand

when considered in the light of the pecu-

Foremost among the birds to be carried

to the Farallones as message bearer is

Daisy, which is supposed after many tests

of speed to be with very little doubt the

most rapid homing pigeon on the Pacific

Coast. It has won laurels by flying from

Fresno and all intermediate points and

from Oroville and all intermediate points

to the lofts of A. Carlisle in Berkeley.

Strong of wing and remarkably sagacious,

Daisy was selected to bring the first mes-

sage ever sent from tbe Farallones to San

Daisy knows the way and has proved it’s

Now when the Swanhilda comes boom-

ing along the first place from which she

will be seen is the Farallones. High above

the surface of the surrounding ocean rises

the lighthouse, the base of which is be-

At the lighthouse there is a powerful tele-

scope, with which objects coming to the

horizon line can be made out clearly.

The Swanhilda is of a peculiar rig. The

nautical eye could easily distinguish her

among other sailing ships. The descrip-

tion of her has been sent forward to the

Farallones, so that she cannot well be

mistaken for any other vessel whenever

she may loom into view.

From the lighthouse a telephone line

leads down to the houses in which the

lighthouse-keepers and their families live

and the line is also connected with the

schoolhouse in which Daisy Annette

Doud, who recently went to the Farallones,

officiates as schoolteacher. So when the

observer at the lighthouse sees the Swan-

hilda, which in all probability will be

earlier tban any other person near the

California coast line, he wil! be able to

signal the fact instantaneously to Miss

Doud, who, already practiced in the flying

of pigeons, will hold herself alert to dis-

patch Daisy in a few seconds to this City.

The dovecote recently established by

A. Carlisle at the Farallones for the benefit

of shipping and the weather bureau is

only a few steps from Farallones school

house. In this dovecote the fifty pigeons

to be taken out on the Lady Mine to-day

will be placed before to-night. The sec-

over the telephone from the lighthouse

she will run to the dovecote, and in five

minutes from tbe time that the Swanhilda

is sighted, she will have dispatched the in-

The distance from the Farallones to

every foot of the way and has flown it. If

the west wind blows Daisy will be in

Berkeley in a very little more than an

hour after the Swanhilda is first seen.

This time is reasonably fixed from recent

over the course, with a northeast wind

blowing at the rate of twenty miles per

hour, in one hour and twenty-five min

stances, Daisy will be in her cote within

There will be no mistake about the

arrival of Daisy in Berkeley and no delay

in making known the arrival. On the

cote to which Daisy will fly there is a bell

which the pigeon must ring when it enters

the cote. This is an electric bell, so that

wben it is rung a signal will be im-

Every one in that house will be on the

alert. Upon the ringing in of this signal

the message will be taken from the cham-

pion messenger and the facts in it will be

immediately telephoned to Mr. Carlisle at

his place of .business on Montgomery

street in this City. Mr. Carlisle will.

therefore be in the enviable position of

knowing first of any one in San Francisco

that the Swanhilda has actually been

In fact the pigeon, Daisy, ought to be the

before it can come by any other means or

route. Supposing that the Swanhilda is

first sighted at 10 a. m. the time schedule

The message which will be brought by

the homer Daisy will be inclosed in a

only eight grains, which’ will not impede

the speed of the messenger. Miss Doud

has a supply of these cylinders convenient

for use, and also the paper prepared es

pecially for the reception of messages.

To make sure that everything shall be

expert with pigeons, will go out with the

birds on the Lady Mine to-day. Mr. Yar

rington goes under the directions of Mr.

Carlisle. He will give the birds to Miss

Doud, pointing out Daisy to her, that the

champion may be selected to make the

opportunity to get into prompt communi

cation with the Farallones on this interest

ing occasion has been afforded through

the courtesy of the Pilot Commissioners,

tain Barker, the efficient secretary of the

commission. Through them the pilot

boat was provided especially to carry out

ligbtkeeper at the Farallones, will un

The birds, other than Daisy, will for the

most part be used for bringing in mes-

sages from the Farallones concerning ships

and weather for the use of the commer-

Several birds may be used to send in news

from the Swanhilda describing her  prog-

ress. This is probably the first time on

earth that a dove has been employed in

helping to bring to justice a fugitive mur-

Captain Merry, secretary of the Cham

ber of Commerce, who has largely helped

to establish the pigeon line at the Faral-