[Note from June: Silent film star Roscoe “Fatty” Arbuckle was an immensely popular actor in the 1920s, subject of a juicy scandal centered in San Francisco, and rumored to have haunted the bar and restaurant once called “Franks” in Moss Beach  with other silent film stars of the era. Today Frank’s is known as the Moss Beach Distillery, and it has been preserved pretty much as it was when originally built in 1927. What’s missing are the buildings that once stood in a crooked row on the cliff to the north (and rumored to be part of a bordello operation.) You can still see slices of the now gone building’s foundations next door to the Distillery. The author Erich von Neff’s story is not about Fatty himself but a bicycling relative.] 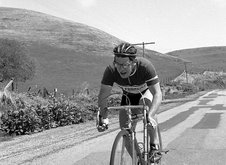 Vince Gatto Slammed up against the Goodyear Tire sign stapled to the fencing encircling the track. Part of the sign peeled off. Vince’s back wheel rose momentarily from the track, and he was still pedaling. The cardboard sign became enmeshed between his chain and front sprocket, and Vince was flailing the pedals, shredding up the sign. He hung there for a split second, then he began tumbling down the banking. The sign was still caught in his chainwheel, and I heard the sign tearing as he came down. All this seemed to take place in slow motion, but really it took one or two seconds at most.

Fortunately by now the field was heading toward the opposite banking and the relief riders were safely strung out away from the spill. Even before Vince hit the bottom warm up of the track his trainers were rushing toward the banking. They pulled him out of the way of the oncoming field, because at full jam the field could swing around the 10 lap to the mile Velodrome in 10 seconds.

Harry Guidi looked at me. He didn’t say anything. But I knew Vince was finished not only for the race, but for a hell of a long while. I sat there with Harry’s army blanket draped over my shoulders. I had my racing tights and jersey on, but my partner, former six day biker, Oscar Juner, had gotten the flu, so there I was watching the race.

I heard an ambulance siren in the distance. Suddenly Harry grabbed the blanket off me. In the infield I could see Gus Gatto’s trainers refitting my Durkopp track bike with a pair of Vince’s extra track wheels, which he had mounted with Continental Holzbahn tyres. Harry gave me a push and I started down the grandstands towards my bike which was now upright and waiting on the warm up side of the track. Gus’s trainers looked and talked like trigger men in “The Godfather.” They were both about 5’9” and barrel chested with matty hair protruding over, around the neck of their sweat-stained T-shirts. As soon as I reached my machine they lifted me onto it like a rag doll. Then they pulled off my jersey and put on one of Vince’s jerseys. It was blue and said “U.S.I.” — which stood for “Unione Sportiva Italiana.” Then they pushed me into the fray. At the same time they shouted, “Kid, you gotta help Gussie out.”

I started climbing up the outer lip of the track to the top of the 55’ banking. As I said I had been given an extra pair of Vince’s track wheels. Vince always filled his tires with helium. They were “bombed to 140-150 psi and sometimes when they overheated during a race, they would burst like a cannon. Filling your tires like that is called dynamiting them. And as I rode up to the top of the banking I had the feeling I was riding something strangely alive and highly dangerous. And that’s how they made me feel. I swung past the torn Goodyear Tire sign and was looking over my shoulder for the oncoming field. Jim Arbuckle, Fatty Arbuckle’s nephew, was leading the field; we used to rib him about his uncle and he was sensitive about Fatty Arbuckle’s affair with Virginia Rapp.

I saw Gus neatly tucked in the middle of the pack. Now a board track constructed in the old six day style has a tendency to give and sway slightly. As the pack approached I could feel a rippled through the boards preceding the pack, and it was exciting to my muscles and at the same time frightening. I spotted where Gus was in the pack and dove down the banking to intercept him. Jim Arbuckle shot by followed by the Lauracella brothers, and the field, then finally my partner Gus. He grabbed me by my jamming tool tucked in my racing tights (basically a rolled piece of cloth your partner can grab hold of), and shouted, “Set me up for the next sprint.” I felt like I was being pushed by an express train when he shoved me into the field.

This was a team race with twelve two-man teams. In a team race one man rides the field, the other rides relief, circling slowly above the relief line halfway up the track. Riding slowly on a 55’ banking can be a bit of an art and damn hairy. Classically the teams exchange each time the field rider intercepts the relief rider. This may be occurring every 20 seconds* on a 10 lap to the mile track, and with 12 teams, 24 men exchanging, you’d better be a damn good bike handler. Especially in those days when foul rules were almost non-existent.

There was plenty of elbowing and cutting in and out. But in spite of this there were very few spills, for, by tacit agreement, riders often helped each other out to prevent the field from spilling. In a way Vince had been lucky. At least the whole damn field hadn’t run over him. He had been the unfortunate victim of crowding. When occasionally the field and relief riders bunch together on the banking crowding the highest man on the banking into the railing, simply because there is no more room. Usually you can see this coming or lean down on the next man. But sometimes it’s unavoidable.

The race became a blur of flashing cranks, sparks when pedals collided, jerseys darting in and out, oaths shouted when exchanges were missed, accompanied by the background cheers of the crowd and the bell whenever there was a sprint. It was a pleasure to set Gus up for the springs. (He was the sprinter and I was the jammer.) He could come through any sort of pocket and could nip the field on the line. My friend Henry McWhirter who’d raced against Major Taylor, the black World spring champion (1899), told me that Gus raced like Major Taylor did. And I know that was a hell of a compliment coming from Henry, as he had beaten World Champion Frank L. Kramer in his prime at the Sacramento Velodrome, but was always left in the dust by the “Black Whirlwind.”

So far the field was on even laps. But I could tell Jim Arbuckle wanted to go for a lap on the field. I tried to stick to Jim’s wheel like glue, but it was like trying to stay behind a motorcycle. Finally Arbuckle’s partner, von Angel, the Marine, shot around Gus just after the spring. Gus and the field started trailing behind. I tore down the banking and Gus gave me a hell of a hand sling and I tucked onto Arbuckle’s wheel just as he and von Angel had made their exchange. We were clear of the field. Jim was going so fast I could not even trade pace with him. But he didn’t seem to give a damn. He thundered around the track. After eight laps of blistering pace, with exchanges, we gained three-quarters of a lap. Gus and I were ahead on points so I thought we had the race in the bag.

I could hear the crowd roar. The announcer kept calling out the prize money being collected from the crowd for the first team to gain a lap. It was now up to $200, and as I heard the bell for the spring I thought: Just 10 more minutes and our win will be history.

Suddenly I heard what sounded like one of the 105 Howitzers I had fired in the Marines. Then my front wheel collapsed. Disintegrated is more like it. Vince not only bombed his tyres, he used 28 hole rims instead of 36, and they were laced tight. The spokes sounded like a harp as they spun through the air. Before I could regain my senses Gus’s goons had a new wheel on my machine, and had me mounted on the bike and strapped in. I looked up to see Jim Arbuckle sprint into the back of the pack, he had gained his lap. Gus’s handlers shoved me just ahead of the oncoming field and shouted their chorus, “Come on, kid, you gotta help Gussie out.” But I’d had it. It was all I could do to stay with the field the rest of the race.

The gun went off and Arbuckle and von Angel were circling the track waving to the cheering crowd. They’d deserved their win. I couldn’t complain. We’d taken second place, and won good money in the sprints. I looked up at Arbuckle, smiling. He’d gotten back at us for the ribbing we’d given him about his uncle, Fatty Arbuckle.

*Because the relief rider is also circling slowly on the track. But he cannot ride too slowly on the 55 degree banking, otherwise he will fall.