I know what I did today….Visited Pillar Point

I took the most exhilarating hike north of Pillar Point and the radar station, better known to us locals as the “Golf Ball.” 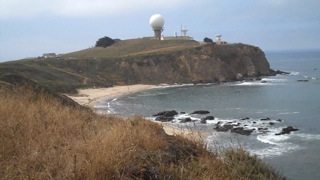 The morning was early and the parking lot that leads to the trail to Mavericks was nearly empty. It was foggy but not cold, and the sun wan anxious to poke his/her head out of the gauze.

Here are some of the people I met and the sights I enjoyed.

[Images below: Wild geraniums are stunning to see along the path.] 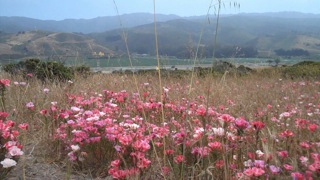 Later I went to visit my friends who work in Princeton, at the Harbor Bookstore and the Mezza Luna Cafe, a place you cannot miss.

First, here’s the trail I was following up the hillside.  Actually, first there’s the view from the trail, then the trail. 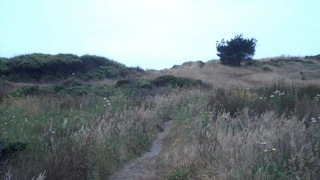 Just as I started my walk I saw this very nice man on a bicycle….I say very nice, because he agreed to pose for me, a complete stranger. 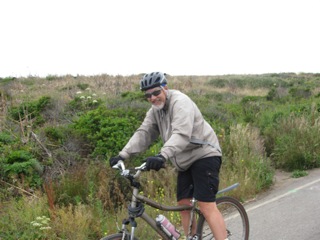 I took a long walk up the trail that’s been smoothed out for bicyclists, and has endless ocean views. When I returned to the small parking lot, I met another bicyclist, and we struck up a conversation about birds. (I am bird-ignorant but I learned from her 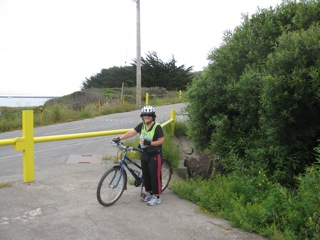 that I should keep an eye out for Blue Herons and that the Crows I saw might have actually been Ravens. Hard to tell the difference because the Crows and Ravens resemble one another. She also once saw a bird that resembles a turkey near where we were standing: sorry I forgot the correct name.

Then I continued my tour of Princeton, visiting my favorite places: the Harbor Book Store, where I purchased Rob Tillitz’s book, “Bootlegger’s Cove” about smuggling along the South Coast, and Carol, the delightful owner, (honestly, no hype here) 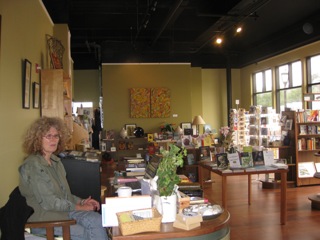 who not only arrange the words and post cards and artwork she sells beautifully in her shop, but is a watercolorist herself.

The most fun place is the Mezza Luna Cafe, which cannot avoid future fame. The people who work there are lovable and you will not leave the Cafe in any other mood except a happy one. It’s unlike any other place I know. 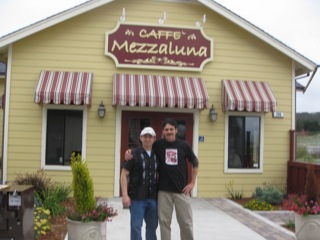