Posted on December 20, 2009 by junemorrall
Hi June,
Most of the stories in James Hutchings’s magazines or books concern Yosemite or the Sierra Gold Fields. His “Farallone” story  was a welcome exception. Though I know of no stories of his specifically about the Coastside, there is a San Francisco beach story that comes close. I’ve attached the cover of the June, 1859, issue of “Hutchings Illustrated California Magazine,” that features the story, and one of the wood engravings accompanying the story, one of a wagon ride along the beach near Seal Rock,  that easily evokes the Coastside’s similar past. Enjoy. John 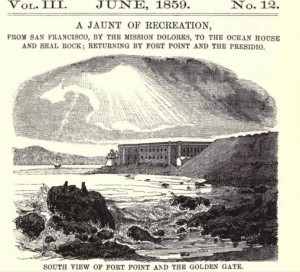 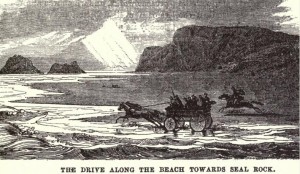 I’ve got a lot of background material on the charismatic Mr. Hutchings and his Magazines, I’ll send next. Wikipedia has articles on both, with links to other online sources for the magazines beside archive.org. He was Mr. Yosemite. The picture placement is only approximate. Enjoy. John

This is Mr. Hutchings’, “Farallone Islands,” article. It appeared  in the second issue of his first volume of the “California Illustrated Magazine,” in August, 1856. Enjoy. John 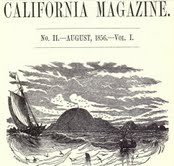 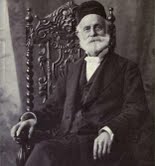 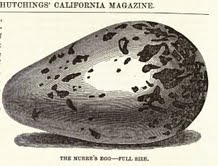 This is the name of a small group of rocky islands, lying in the Pacific Ocean, about twenty-seven miles west of the Golden Gate, and  thirty-five miles from San Francisco.

These islands have become of some importance, and of considerable interest, on account of the vast quantity of eggs that are there annually gathered, for the California market; these eggs having become an almost indispensable article of spring and summer consumption, to many persons.

By the courtesy of the Farallone Egg Company, through their President, Captain Richardson, the schooner Louise, Captain Harlow, was placed at our service, for the purpose of visiting them; and, in company with a small party of friends, we were soon upon the deep green brine, plowing our way to these ” Isles of the Ocean.”

To the dwellers of an inland city, there is music in the ever restless waves, as they murmur and break upon the shore ; but, to sail upon the broad heaving bosom of the ocean, gives an impression of profoundness and majesty that, by contrast, becomes a source of peaceful pleasure; as change becomes rest to the weary. There is a vastness,around, above, beneath you, as wave after wave, and swell after swell, lifts your tiny vessel upon its seething surface, as though it were a feather, a floating atom upon the broad expanse of waters. Then, to look into its shadowy depth, and feel the sublime language of the Psalmist : Lord, how manifold are thy works,! in wisdom hast Thou made them all: the earth is full of thy riches. So is this great and wide sea, wherein are things creeping innumerable, both small and great beasts. There go the ships. There is that leviathan, whom Thou hast made to play therein.

These wait all upon Thee : that Thou mayest give them their meat in due season. Thou openest thy hand, they are filled with good. Thou hidest thy face, they are troubled.

“Yonder blows a whale!” cries one.

“Just off our larboard bow”

Oh! I feel so seasick”

Caption: ENCHANTED WITH THE DELIGHTFUL PROSPECT OFF THE BAR

“Well, never mind that; look up, and

don’t think about it”

Reader, were you ever seasick? If your experience enables you to answer in the affirmative, you will sympathize somewhat with the poor subject of it. Yonder may be this beauty, and that wonder, but a don’t-careishness comes over you, and if all the remarkable scenes in creation were just before you,I don’t care is written upon the face, as you beseechingly seem to say : Pray don’t trouble me, my hands are full.” “Whales, sea gulls, porpoises, and even the white, foamy spray, that is curling over Duxbury Reef, are alike unheeded.

“How are you now ?” kindly asked our good natured Captain, of the one and the other.

The mere mention of anything to eat or to drink is only the signal for a renewal of the sickness.

“Thank goodness! I feel better,” says one, after a long spell of sickness and quiet.

” So do I,” says another ; and, just as the ” Farallones ” are in sight, fortunately, all are better.

Now the air is literally filled with birds birds floating above us, and birds all around us, like bees that are swarming ; we thought the whole group of islands must have been deserted, and that they had

poured down in myriads, on purpose to intercept our landing, or “bluff us off;” but, as the dark weather beaten furrows, and the wave washed chasms, and the wind swept masses of rock, rose more defined and distinct before us, as we approached, we concluded that they must have abandoned the undertaking for upon every peak sat a bird, and in every hollow a thousand ; but, looking around us again, the number, apparently, had increased, rather than diminished ; and, the more there seemed to be upon the islands, the greater the increase round about us so that we concluded ourfears to be entirely unfounded ! The anchor is dropped in a mass of floating foam, on the southeast, and sheltered side of the islands, and, in a small boat, we reach the shore ; thankful, after this short

voyage to feel our feet standing firmly on terra firma.

Looking at the wonders on every side,we were astonished that we had heard so little about them ; and, that a group of islands like these, should lie within a few hours

sail of San Francisco, yet not be the resort of nearly every seeker of pleasure, and every lover of the wonderful.

It is like one vast menagerie. Upon the rocks adjacent to the sea, repose in easy indifference, thousands yes, thousands of sea lions (one species of the seal,) that weigh from two to five thousand pounds each”

As these made the loudest noise, and to us were the most curious, we paid them the first visit. When we were within a few yards of them, the majority took to the water, while two or three of the oldest and largest remained upon the rock, standing guard over the young calves, that were either at play with each other, or asleep at their side. As we advanced, these masses of ” blubber ” moved slowly and clumsily towards us, with their mouths open, and showing two large tusks, that were standing out from their lower jaw, by which they gave us to understand that we had better not disturb the repose of thw juvenile lions,” nor approach too near ; or, we might receive more harm than we intended, or wished. But the moment we threw at them a stone, they would scamper off and leave the young lions to the mercy of their enemies.